I urge anyone in south-east England to keep your eye on West Forest Sinfonia – they are a very good ensemble, with a fantastic conductor unafraid to put on less familiar repertoire. Whatever differences in finesse exist between this group and a professional orchestra, they're not nearly as great as you’d think. And they are more than made up for by being able to hear such a rarity, up close in a bright-sounding concert hall, given a performance of such genuine dedication and conviction.
--patreon.com, January 2019

This was glorious. Hearing [Bax 3rd Symphony] live for the first time since I caught Bax bug in the early 1970s was resoundingly worth the 400-mile round-trip.
--Seen and Heard International, January 2019

Rosenkavalier was a romp from beginning to end, excellently led by Wade and tightly controlled by Ellis. There was no hint of a stuggle with the piece's virtuoso demands, as the players milked the ravashing material at their disposal.
--Henley Standard, September 2015

In (Rachmaninov's 2nd Symphony) Philip Ellis drew out all the emotion from a well prepared orchestra ... it was an outstanding performance (Debussy's Première Rhapsodie) by both soloist and orchestra.
--Wokingham Times, September 2010 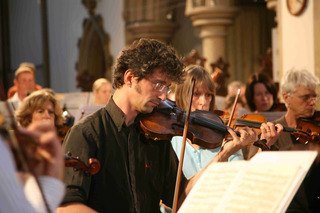 The orchestra gave a beautifully performed account of Prokofiev's moving fifth symphony. The conductor Philip Ellis captured the sweeping legato sadness of the opening movement which reflected the mood of wartime Russia..... It was a splendid and exhilarating performance.
--Wokingham Times, January 2010